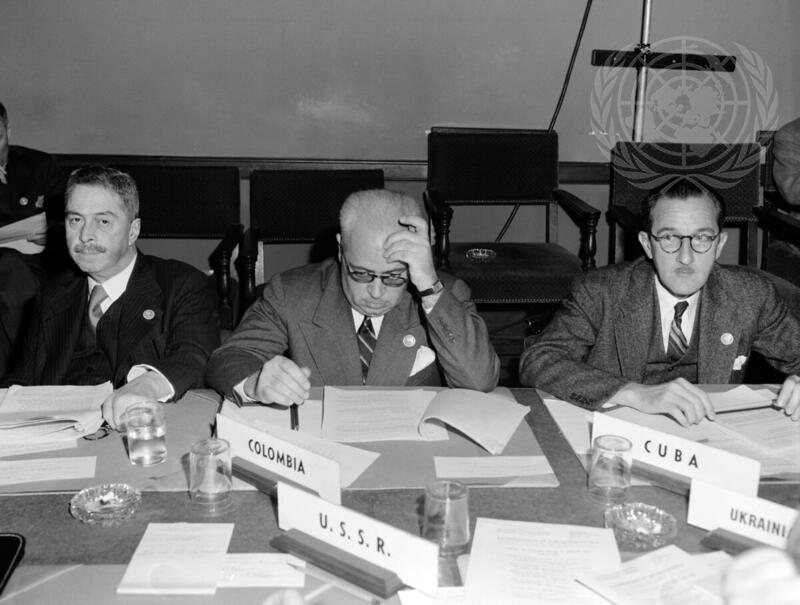 Several conferences and agreements led up to the 1945 San Francisco Conference when the text of the Charter was finalized, adopted and signed. ​

Between the adoption of the Charter and the beginning of the functioning of the United Nations, the Preparatory Commission and its subsidiaries worked on many practical matters and made recommendations to the UN organs.

Key texts were published in United Nations Documents, 1941-1945, published by the Royal Institute of International Affairs, 1946.

The United Nations Conference on International Organization, was held in San Francisco, California, 25 April - 26 June 1945, to draft the Charter of the United Nations and the Statute of the International Court of Justice. The text was based on earlier proposals, negotiated in various subsidiary bodies, and finally adopted unanimously in a plenary meeting of the Conference on 25 June 1945.

China was the first country to sign the UN Charter on 26 June 1945. Then, according to the 1946-1947 UN Yearbook, page 33, "It was arranged that the signatures of the U.S.S.R., the United Kingdom and France should follow, and then, in alphabetical order, the remaining nations, with the United States, as host country, signing last. As each delegation came forward to sign, its chairman made an official speech to commemorate his country's participation in the work of the Conference."

In accordance with Article 110, the Charter entered into force on 24 October 1945, after ratification by the five permanent members of the Security Council and a majority of the other countries. Twenty-two countries subsequently deposited their instruments of ratification.

Preparatory Commission of the United Nations, 1945

The Preparatory Commission was established to make practical arrangements for the transition from a proposal embodied in the Charter to a functioning organization. According to the document, the Commission:

Report of the Executive Committee to the Preparatory Commission

Report of the Preparatory Commission