“In the past, science has often been able to provide adequate protection against new weapons it has given into the hands of an aggressor, but it cannot promise such efficient protection against the destructive use of nuclear power. This protection can only come from the political organisation of the world. Among all arguments calling for an efficient international organisation for peace, the existence of nuclear weapons is the most compelling one.” The Franck Report, 11 June 1945.

Following the discovery of the neutron in 1932, scientists quickly realised its potential to create a bomb of unprecedented force. After Hitler invaded Austria and Czechoslovakia in 1938, an international group of scientists, including Albert Einstein, Leo Szilard, and Edward Teller, contacted President Roosevelt to warn him of the threat. By 1940, the United States, in cooperation with Great Britain and Canada, had a secret weapons programme, and successfully detonated the first atomic bomb in August 1945.

The Soviet Union had known of the program since 1943, and by the end of WWII, it had its own atomic bombprogramme.  The dangers of a post-war nuclear arms race were evident to scientists and others, who submitted the Franck Report to President Truman, urging him, to demonstrate the new weapon to representatives of the United Nations on a deserted or barren island.The UN General Assembly resolution I of January 1946 called for the creation of the United Nations Atomic Energy Commission to “deal with the problems raised by the discovery of atomic  energy”. Because of the disagreements between the Western Powers and the Soviet Union concerning the international control of fissile material production before achieving disarmament, the UN Atomic Energy Commission ceased its work in 1949 and was officially closed in 1952. Alarmed at the prospect of nuclear technology proliferating around the world and the number of Member States with atomic bomb making capabilities, United States President Dwight D. Eisenhower proposed the “Atom for Peace” programme in 1953, leading to the establishment of the International Atomic Energy Agency (IAEA) in 1957. 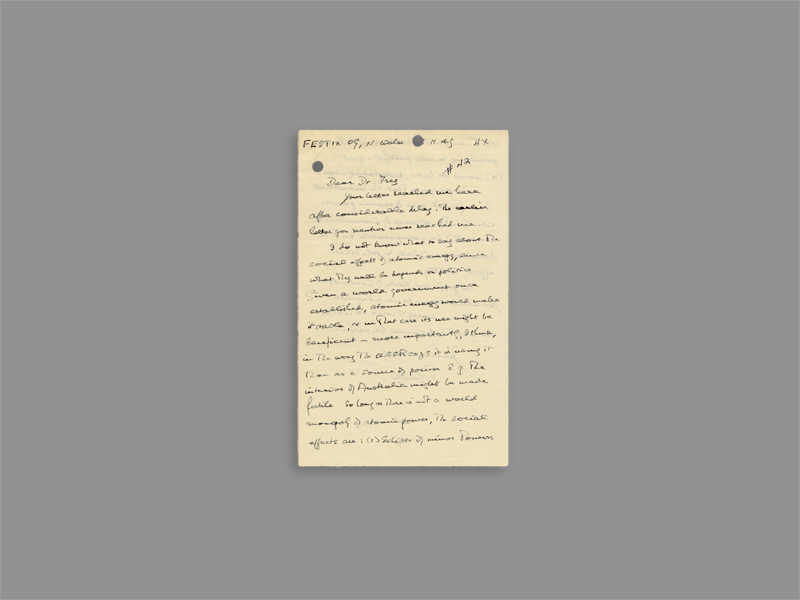 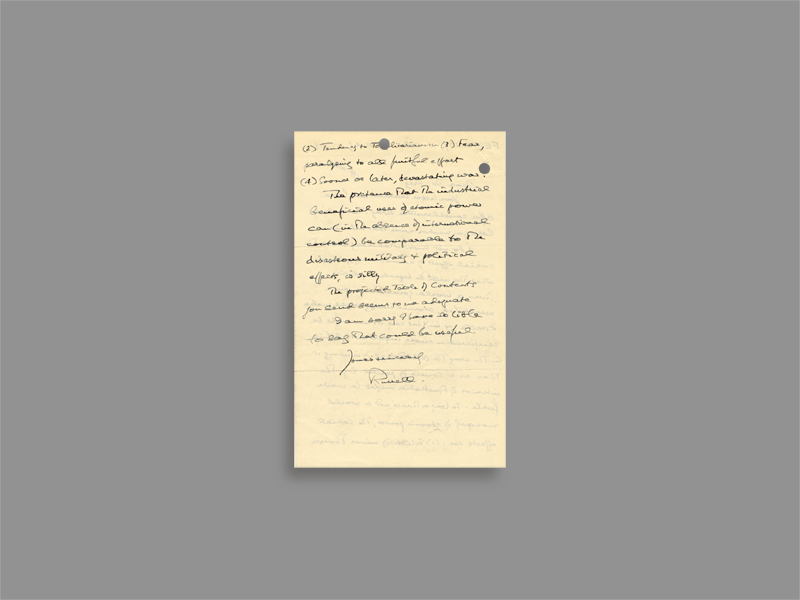 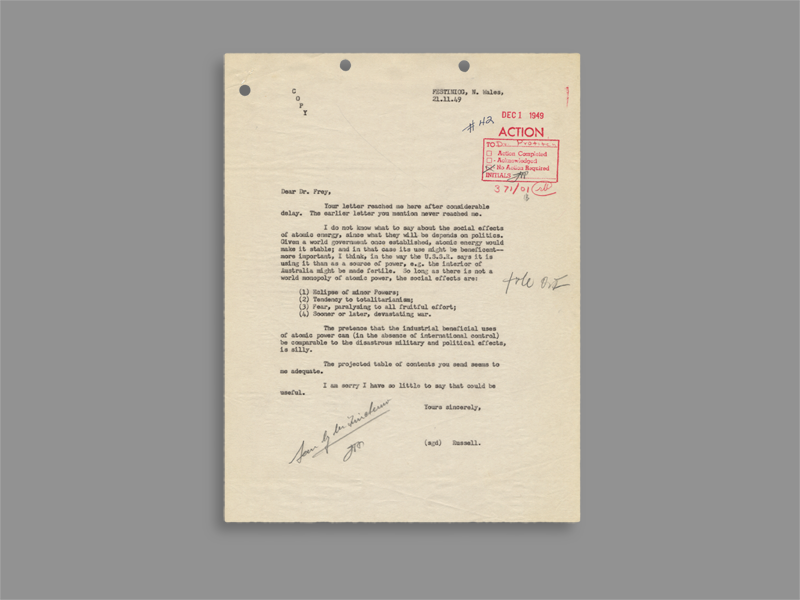 A letter sent by Bertrand Russell (British philosopher), 21 November 1949, in response to a query by Otto Frey, the first Director of the UN Atomic Energy Commission. One of the function s of the UN Atomic Energy Commission was to query leading scientists and intellectuals with the aim of creating a comprehensive bibliography of information and promote scientific knowledge sharing about atomic energy. Bertrand Russell later became the first President of the UK-based Campaign for Nuclear Disarmament. 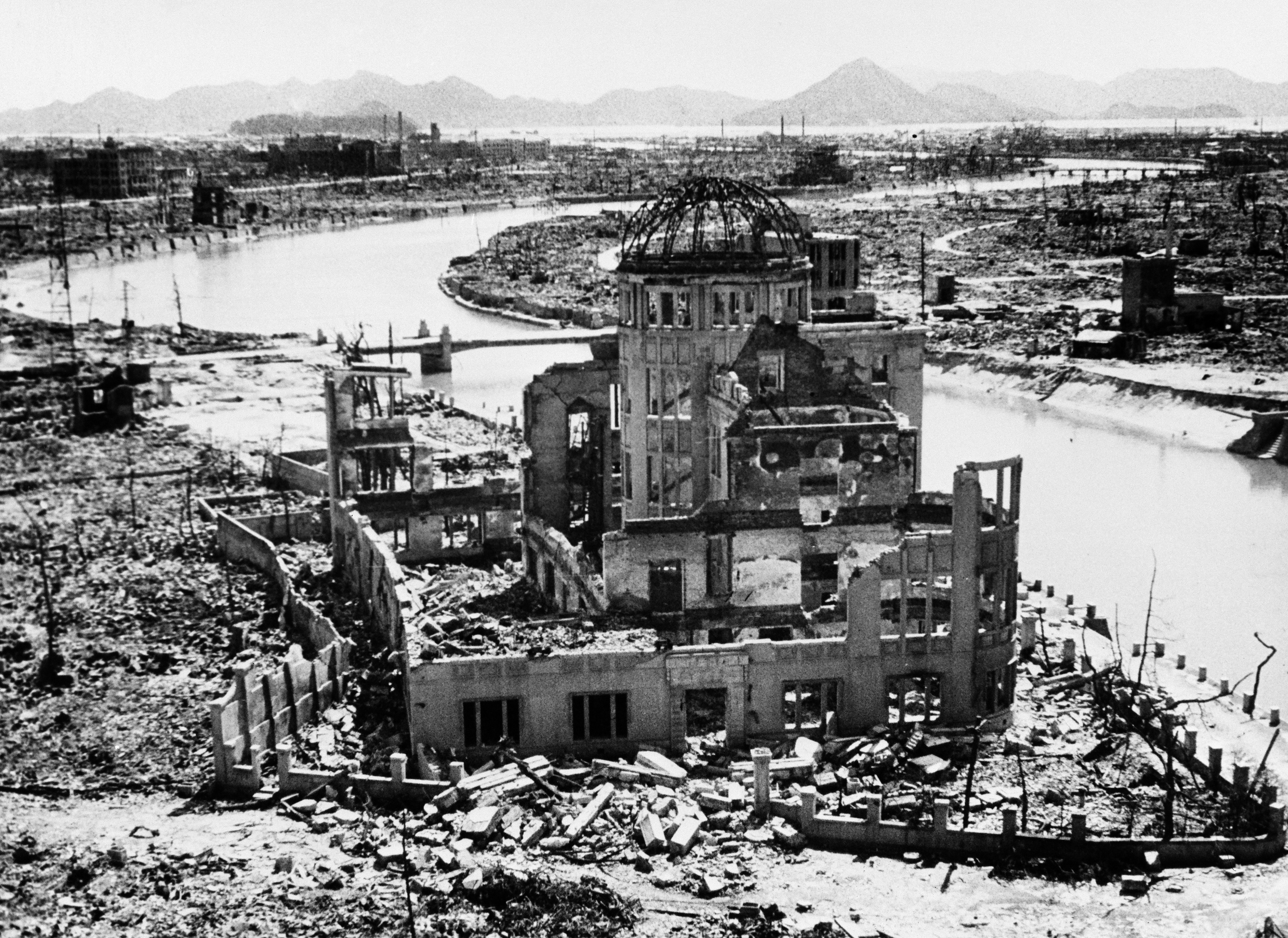 Hiroshima was the first Japanese city to be bombed on 6 August 1945. On detonation, the temperature reached 60 million degrees. More than 100,000 men, women and children were killed by the blast, the heat and radiation.The bomb obliterated 60,000 buildings.

US Military photograph of the nuclear cloud above Nagasaki, 9 August 1945 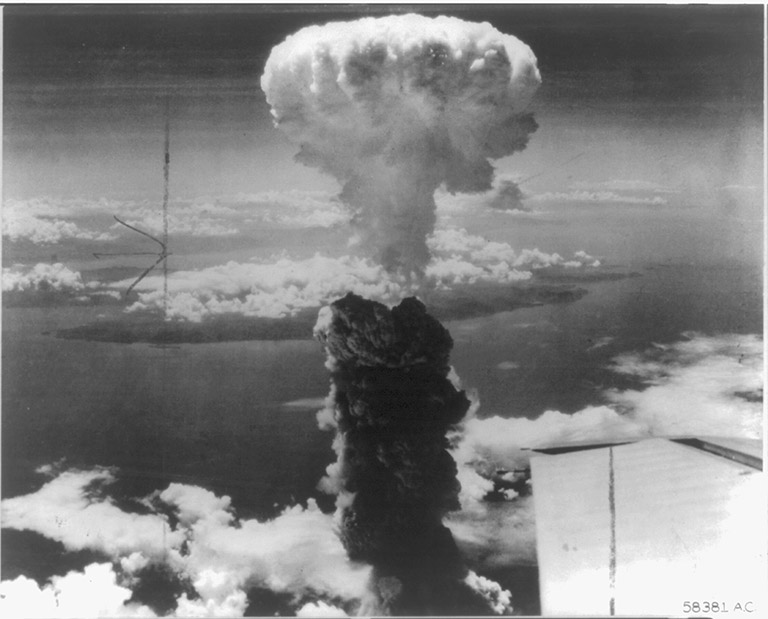 US military photograph of the nuclear cloud rising above Nagasaki, Japan, 9 August 1945.

Following the Nagasaki bombing and the invasion of Japan by the Soviet Union on 8 August,  Emperor Hirohito intervened and ordered the Supreme Council to accept the terms the Allies had set in the Potsdam Declaration for ending the war. Japan surrendered officially on 15 August 1945.

One of the first report of the General Assembly's First Committee 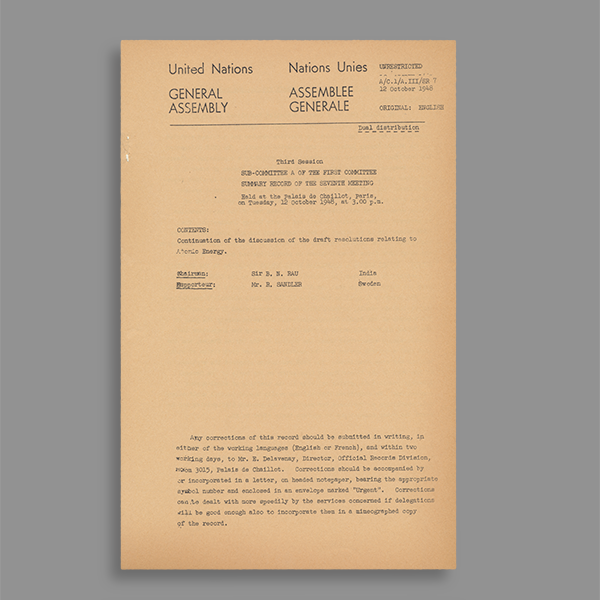 Proceedings of the discussions of the First Committee of the General Assembly on atomic energy and the role of the Atomic Energy Commission. This session was held in Paris at the Palais Chaillot. October 1948.

The Atomic Energy Commission was to make specific proposals to promote basic scientific information sharing  on the peaceful use of nuclear energy; on the elimination of atomic weapons from national armaments and on the development of an effective safeguard and inspection system .

Opening address to the first meeting of the UN Atomic Energy Commission by Bernard  M. Baruch 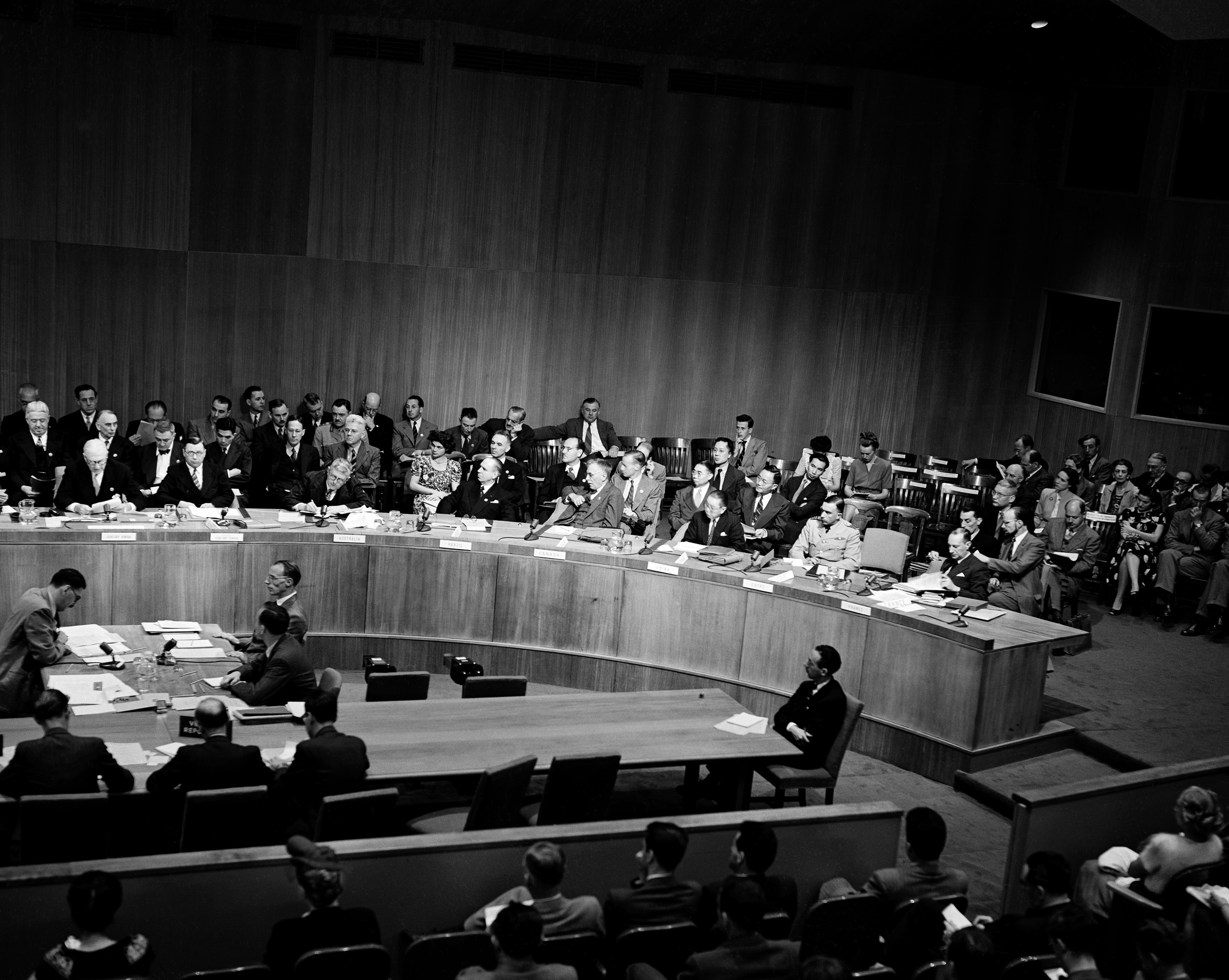 Bernard  M. Baruch, United States representative and temporary Chairperson, delivers his opening address to the first meeting of the UN Atomic Energy Commission. The Baruch Plan of 14 June 1946 included the United State’s agreement to destroy its nuclear weapons on the condition that all other countries pledge not to produce them, and agree to international inspection.

At the end of 1946, the Atomic  Energy Commission reported to the Security Council that “it was useless to continue its work until a political accord had been reached between the Western Powers and the Soviet Union”. In 1947, the negotiations reached an impasse; thereby implying that an agreement was going to be unlikely.

Letter from the Delegation of the Soviet Union to the Chair of the UN General Assembly’s First Committee, November 1946.

“The General Assembly deems it necessary that all States Members [sic] of the United Nations organization should submit information regarding armed forces and armaments in their own territory, this information to be submitted when the Security Council will consider the proposals for  the general reduction of armaments 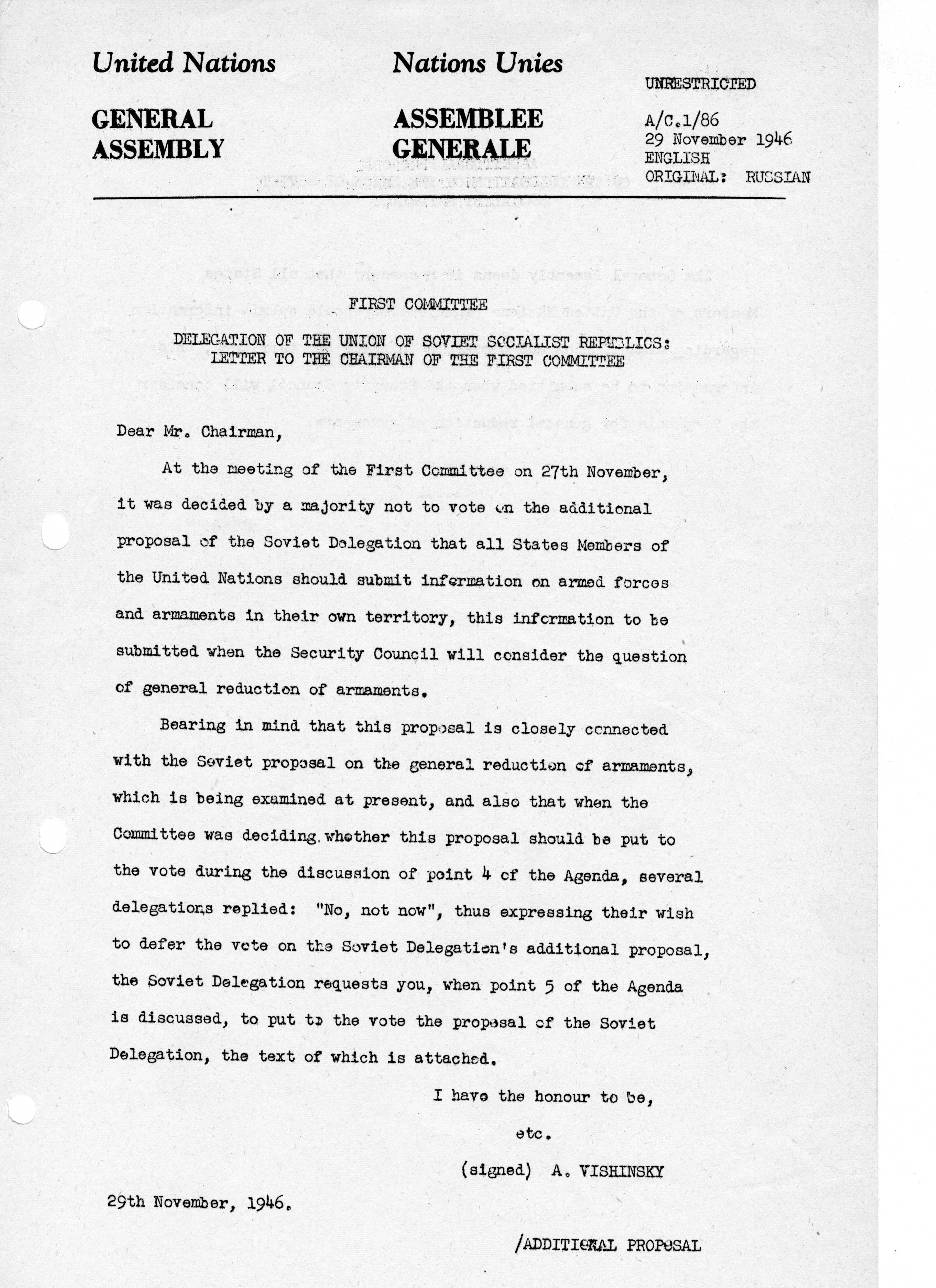 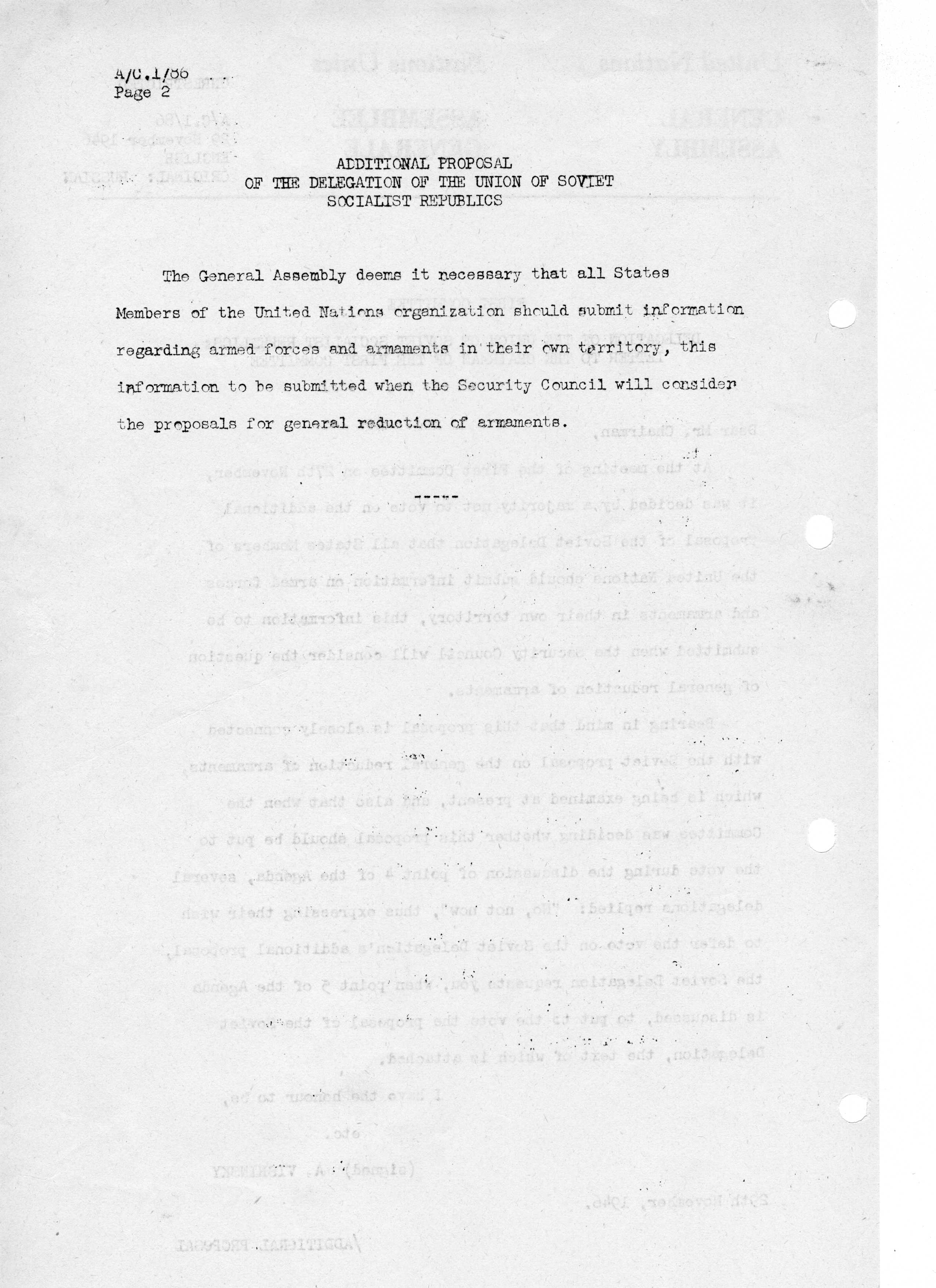 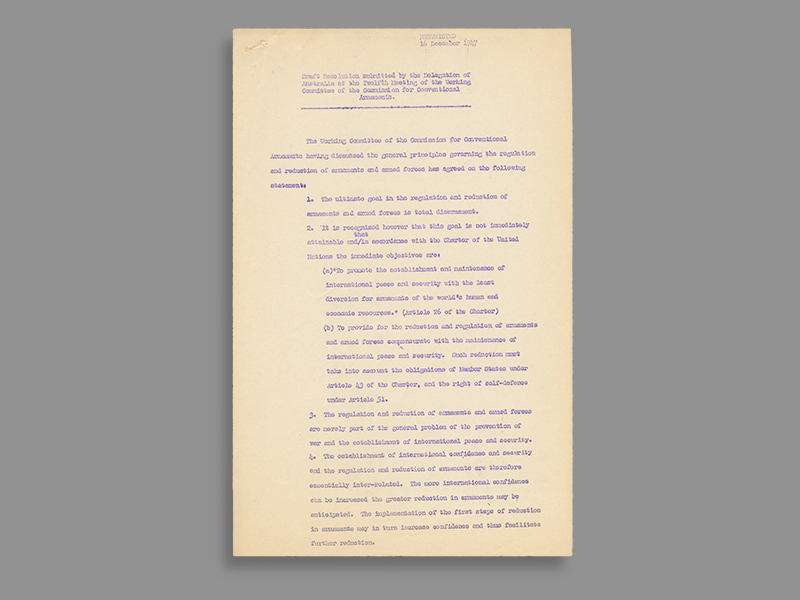 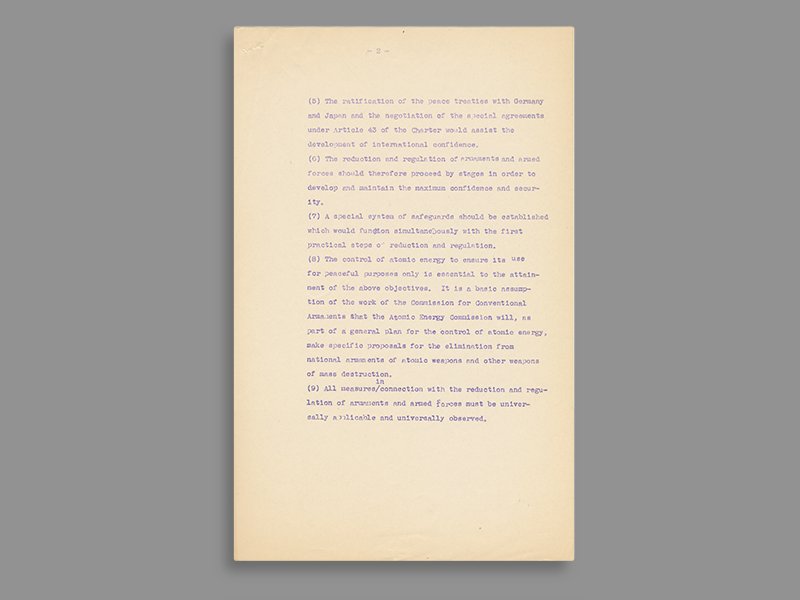 Draft Resolution submitted by the Delegation of Australia in December 1947 at the Twelfth meeting of the Working Committee of the Commission for Conventional Armaments.