“It is not the purpose of this Conference to draft a treaty of peace in the old sense of that term. It is not our assignment to settle specific questions of territories, boundaries, citizenship and reparations.  This Conference will devote its energies and its labours exclusively to the single problem of setting up the essential organisation to keep the peace. You are to write the fundamental charter.” Address by American President, Harry S. Truman, Conference in San Francisco, 25 April 1945.

As WWII came to a close in the spring of 1945, the representatives of 50 nations came together in San Francisco to review and rewrite the Dumbarton Oaks agreements of 1944. The conference led to the drafting of the United Nations Charter.

The documents and photographs displayed in this exhibition are a small sample of the 3,500 cubic feet of records created at the San Francisco Conference. The documents were subsequently shipped to London to be used by the Preparatory Commission of the United Nations, which met between August and November 1945. The Preparatory Commission was the final milestone in the establishment of the United Nations.

Members of the public were encouraged to communicate their ideas and thoughts about the San Francisco Conference, and many submitted plans, proposals for songs and flags, as well as expressions of encouragement, like this one from the Sweethearts of Servicemen, Kings County Chapter, Brooklyn, New York, United States. April 1945.

Public interest in the San Francisco Conference was intense, as demonstrated by the address on this letter mailed from a remote region of France (Puy de Dôme). April 1945.

One of UNCIO's committee meetings, April 1945 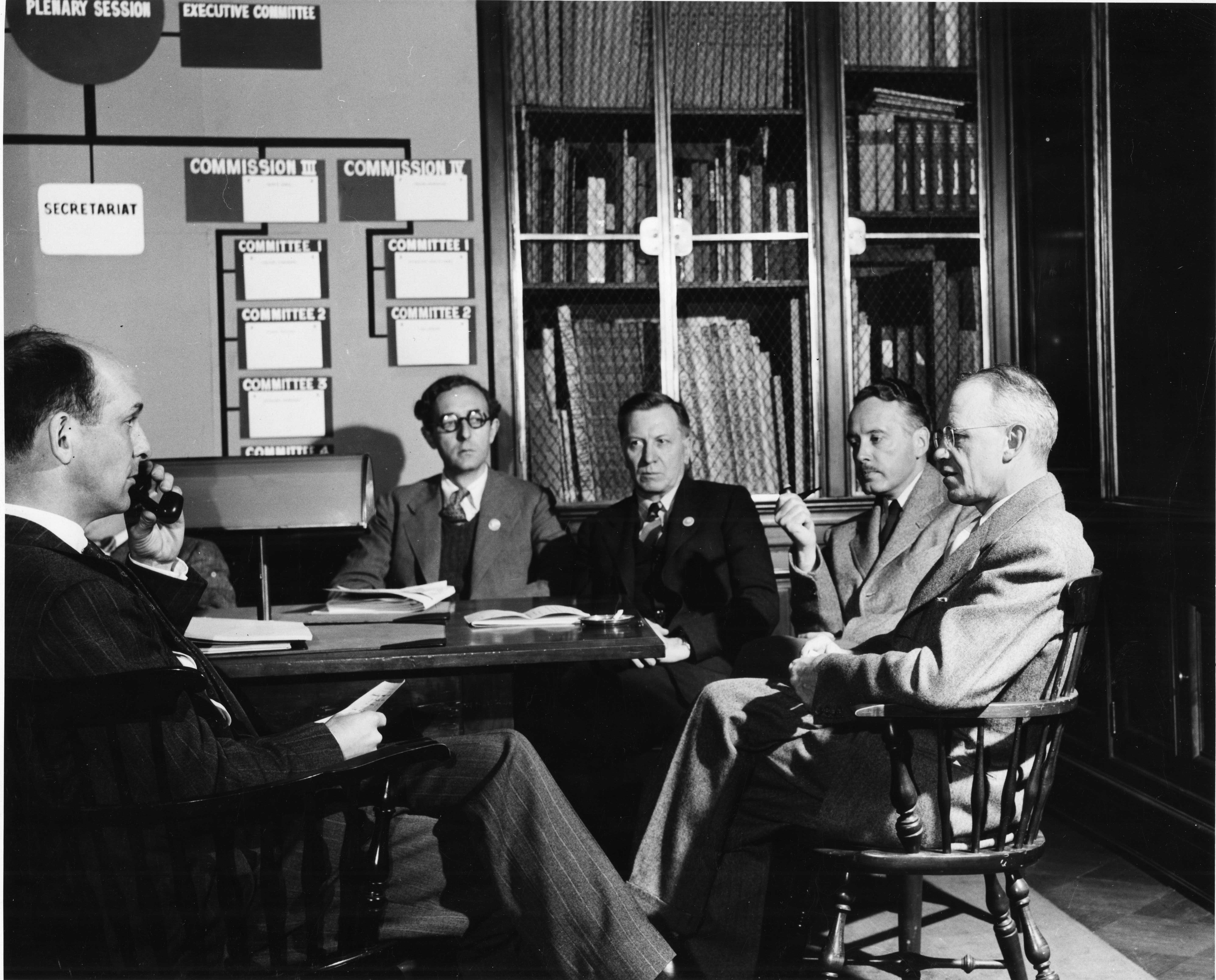 UNCIO was the scene of heated debates between the delegations, particularly regarding of the veto powers of the "Big Five" (China, France, the Soviet Union, the United Kingdom and the United States). 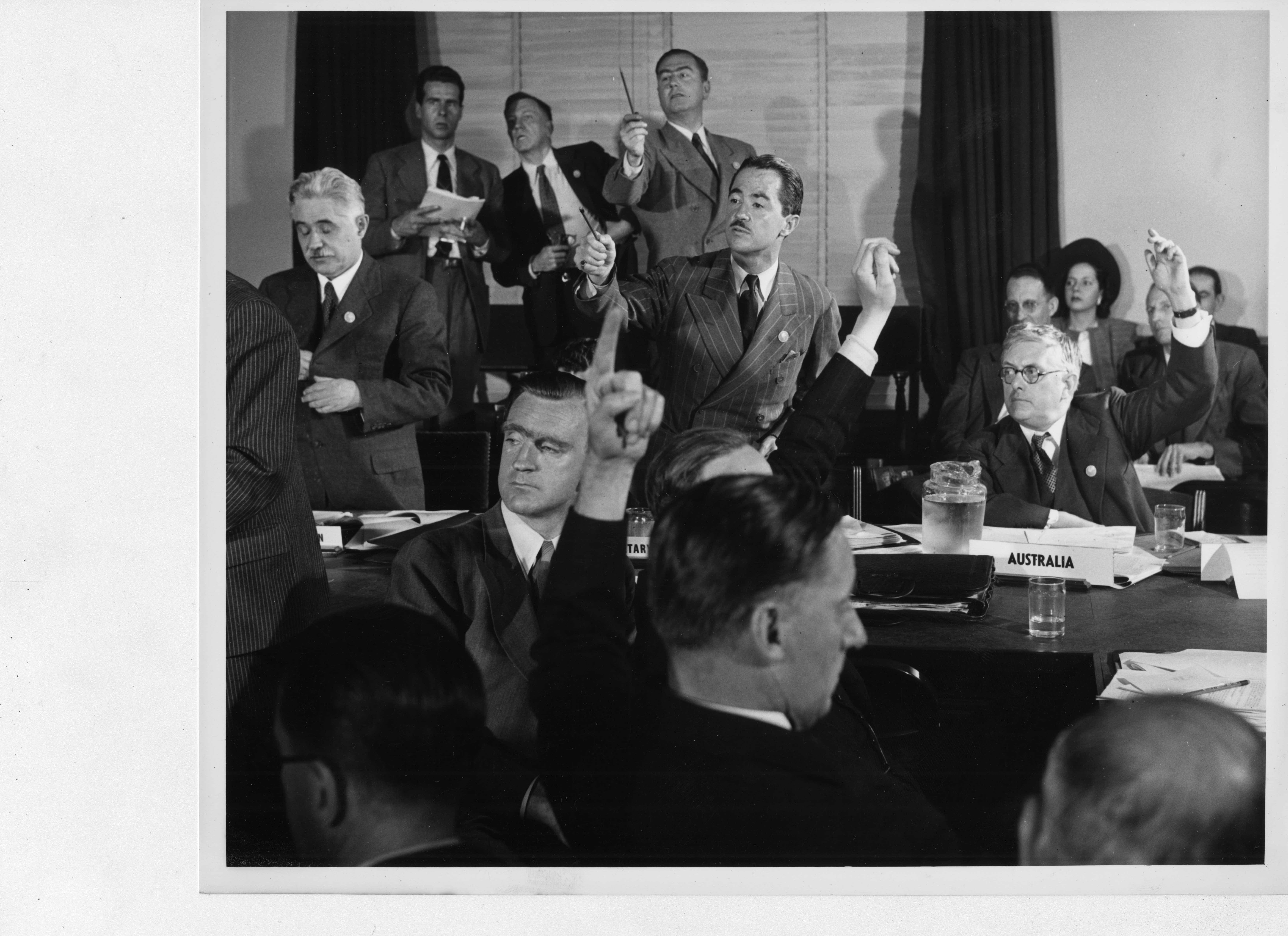 Delegates vote during one of the Committee meetings at the San Francisco Conference, May 1945.

Delegates read about the end of WWII in May 1945 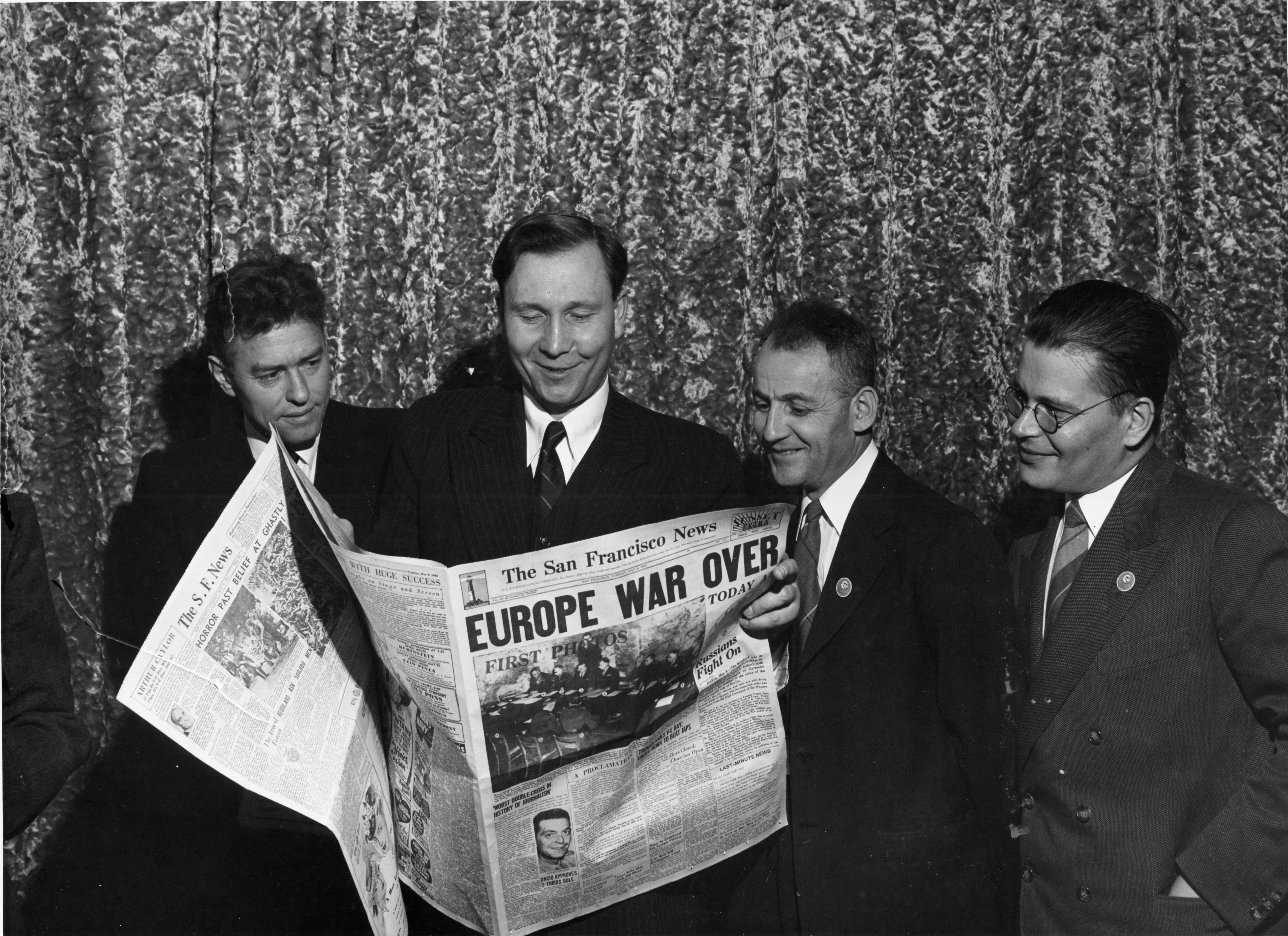 News of the end of WWII welcomed by UNCIO Delagates.

Delegation to UNCIO from Liberia 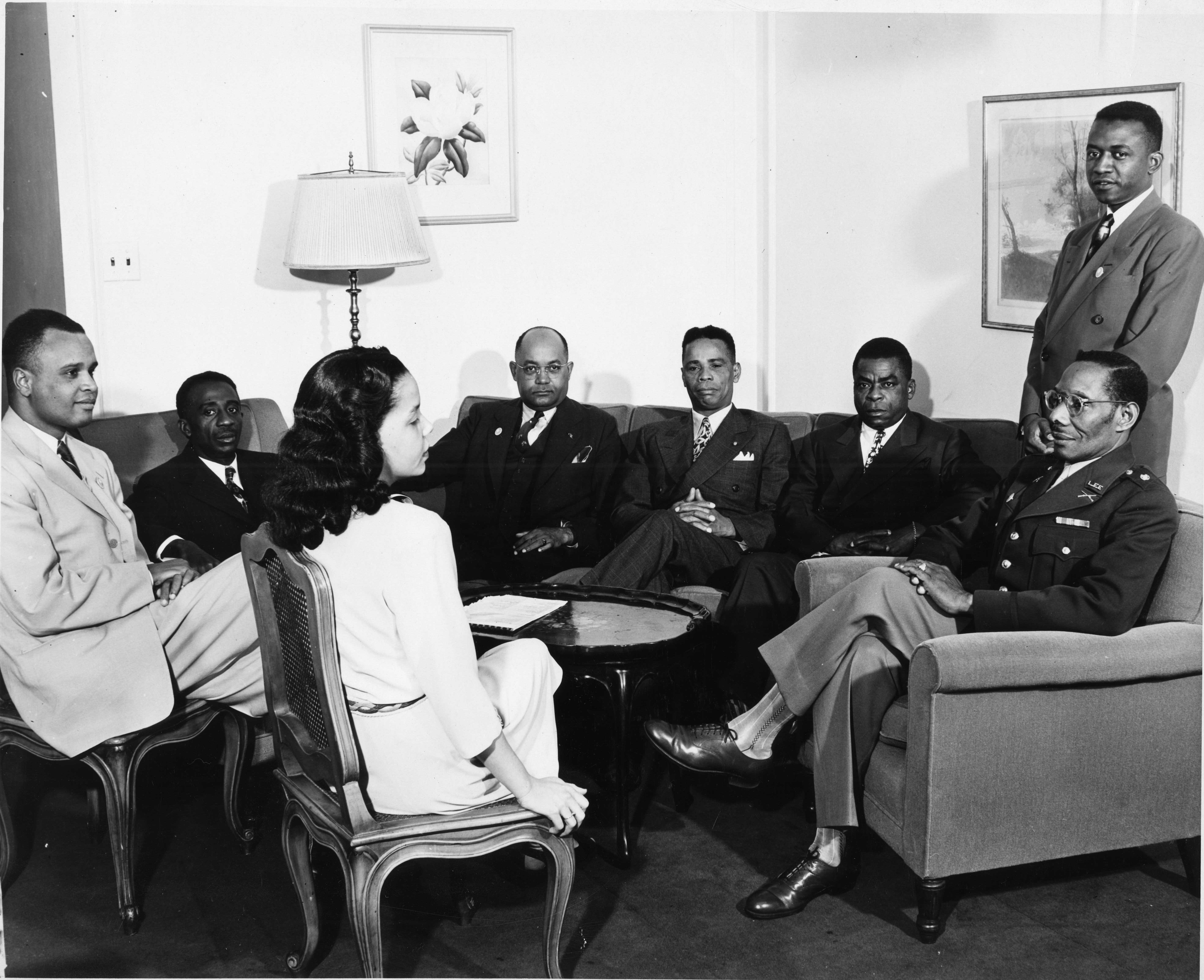 Liberia was one of three Nations representing the African continent along with Egypt and Ethiopia. 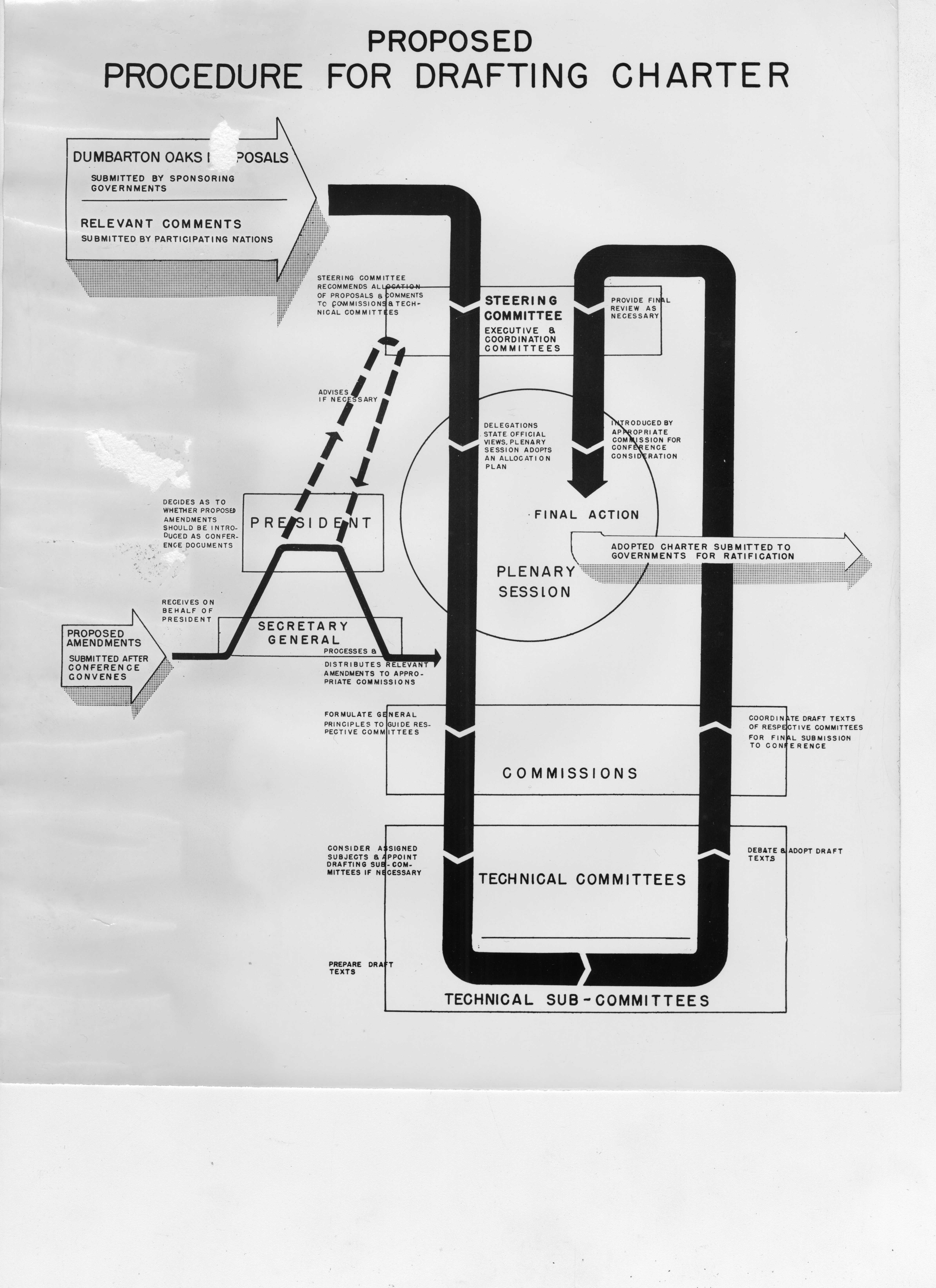 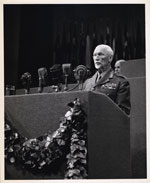 South African Prime Minister Jan Christian Smuts addresses the San Francisco Conference in May 1945. Smuts was instrumental to the founding of the League of Nations and was the only delegate at the Conference to sign the charters of both the United Nations and the League of Nations. He was largely responsible for drafting the Preamble of the Charter and shaping the rest of its content. However, during the post-war years, he drafted laws that later became the framework for apartheid. 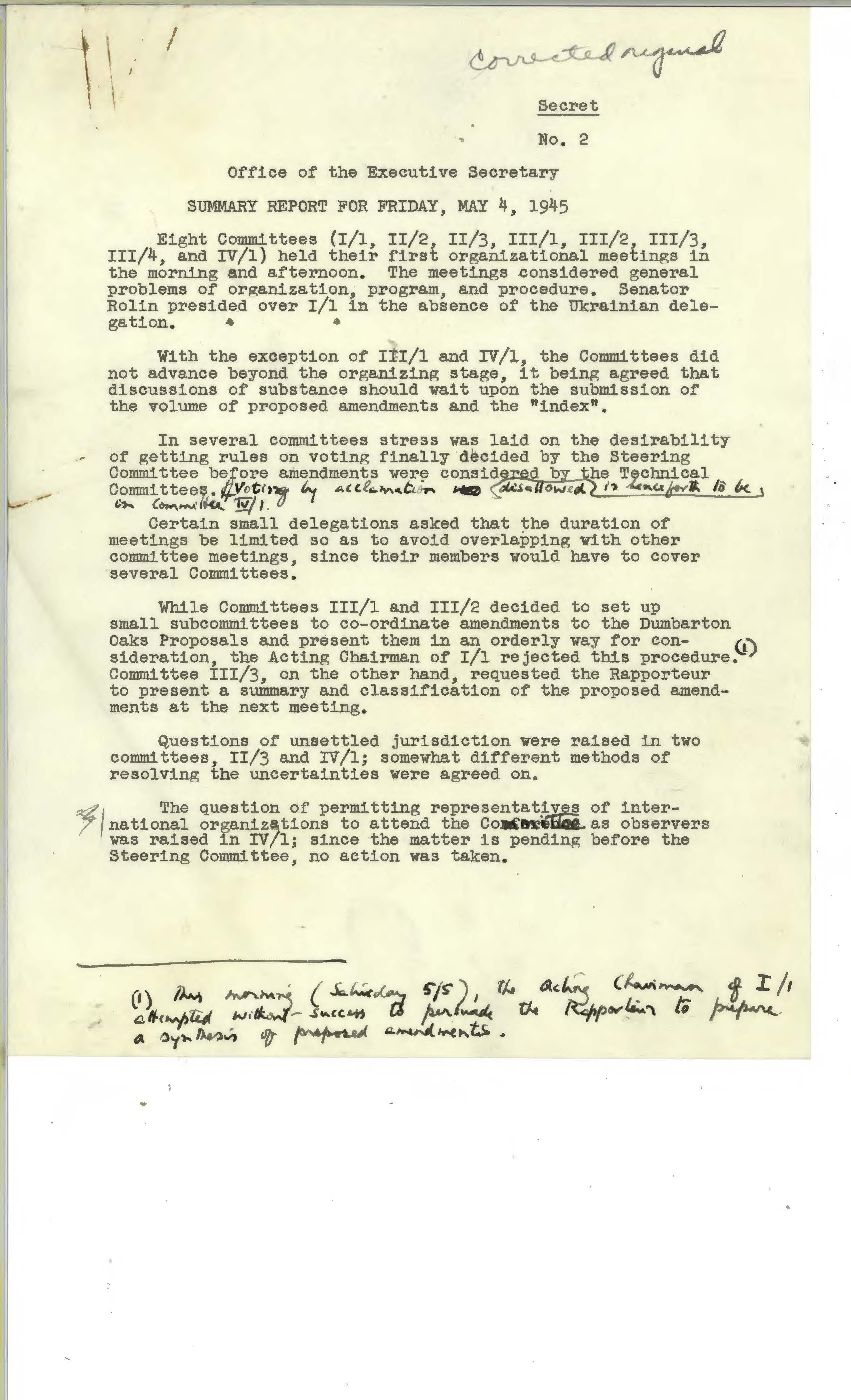 Document distribution at the Conference 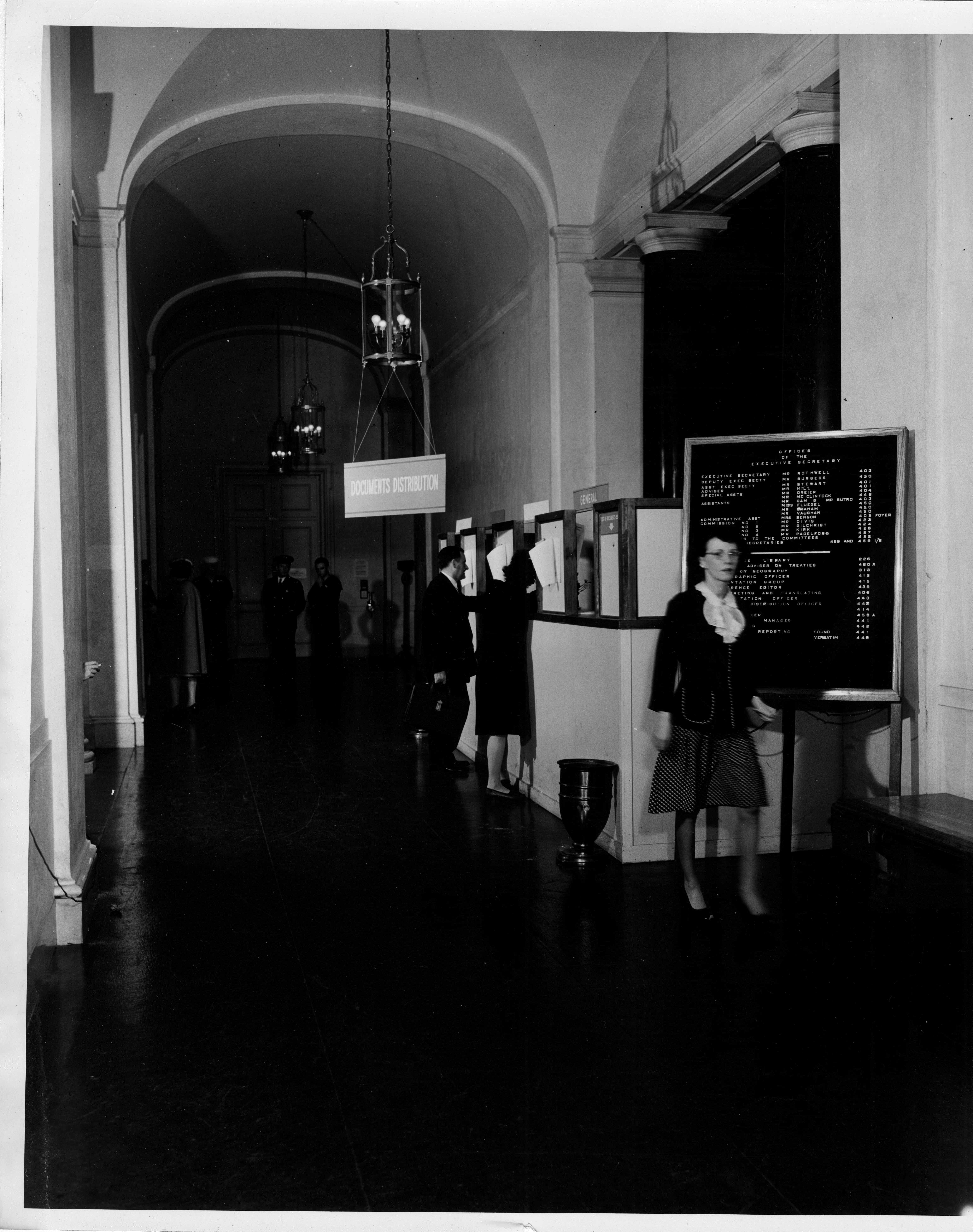 International Secretariat staff organise documents for distribution to delegations. The function of the Secretariat was to plan the work of the Committees, prepare the minutes and documents, provide translation and interpretation and other support functions, April 1945. 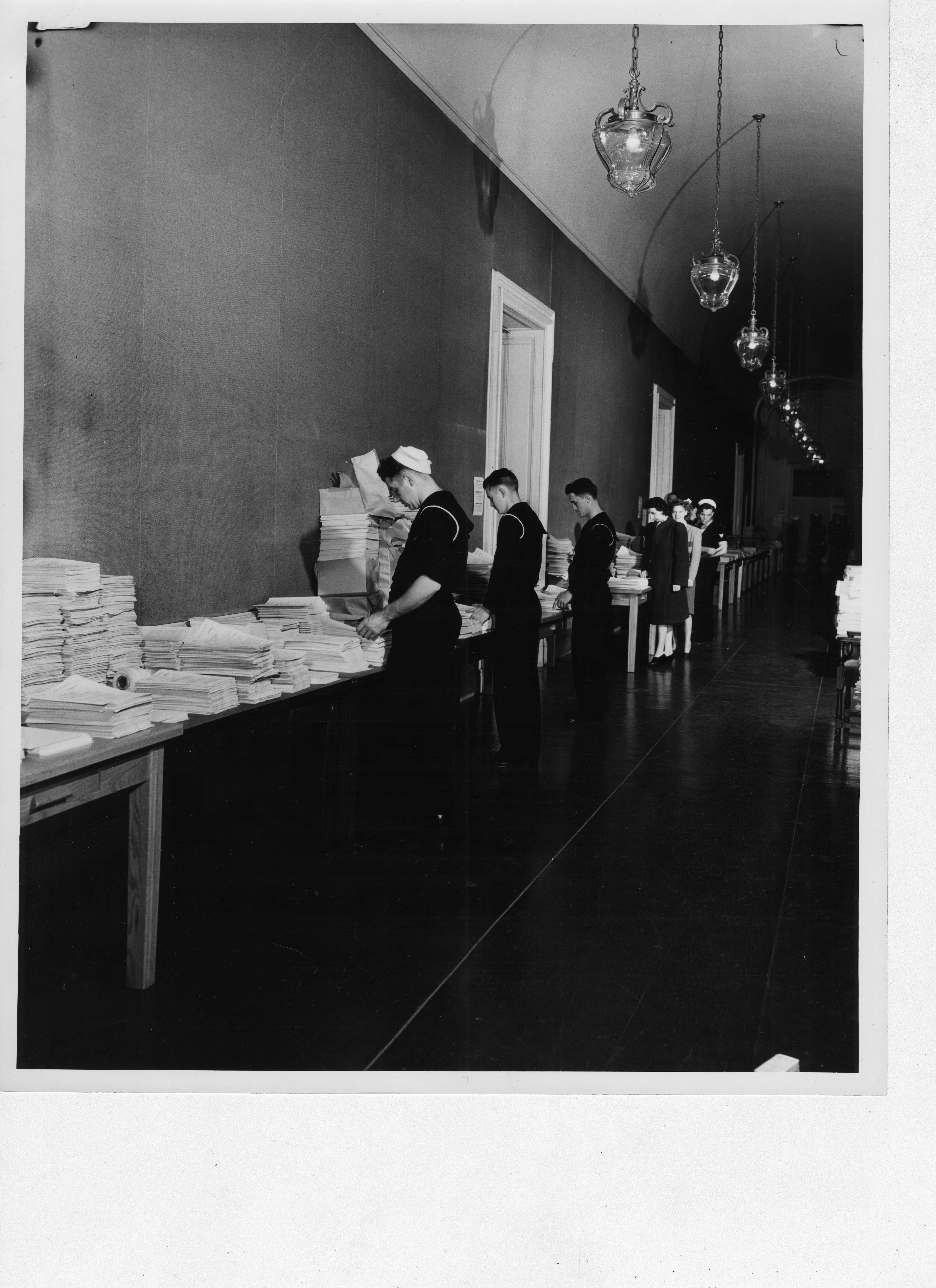 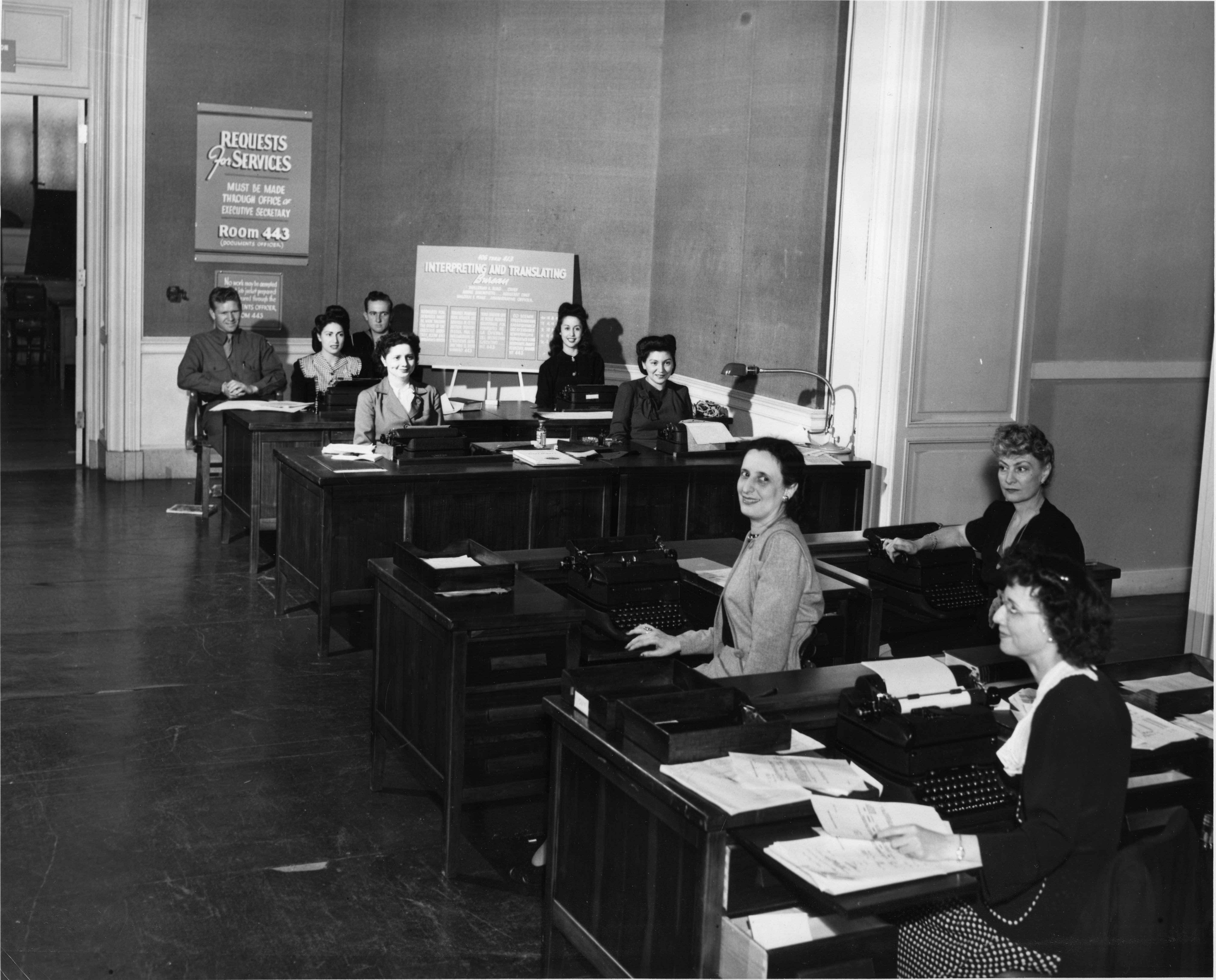 Translation was provided in the two working languages and in the five official languages of the United Nations at the time (Chinese, English, French, Russian and Spanish). 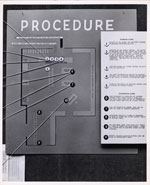 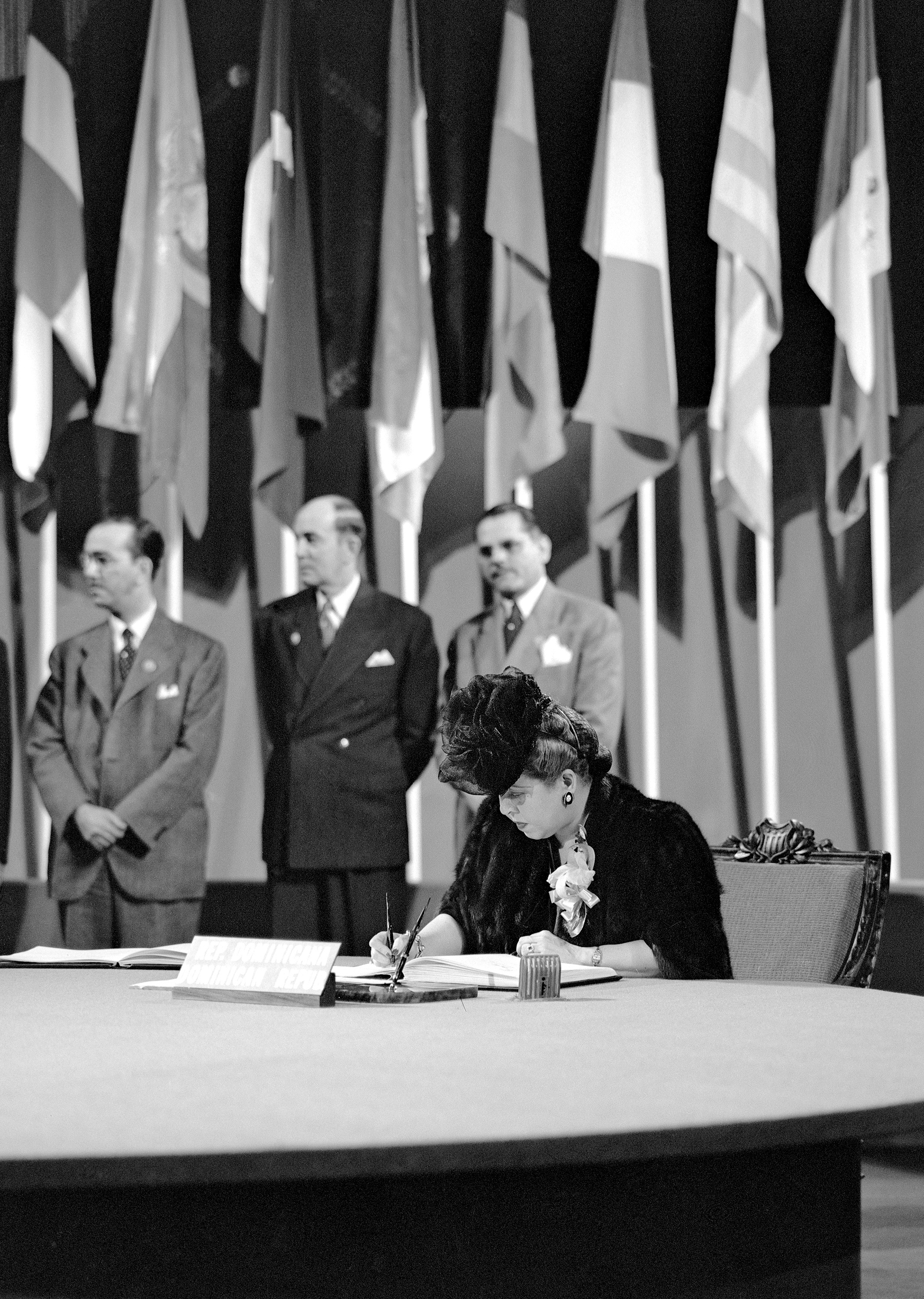 Ms. Bernardino  was one of only four women to do so. She was a prominent women’s rights activist and she contributed to drafting the phase “respect for human rights and for fundamental freedoms for all without distinction as to race, sex, language, or religion’’ in Article I of the Charter. 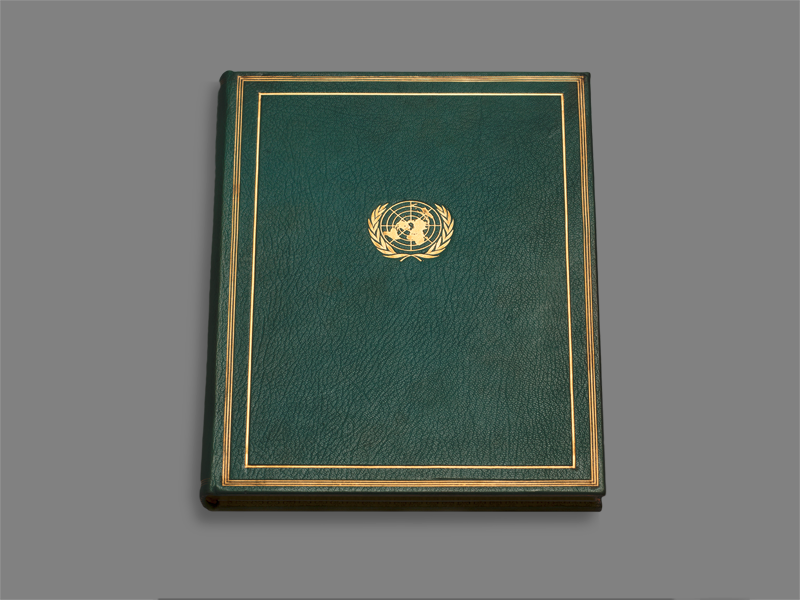 At the time the Charter was signed, it was common practice to deposit multilateral treaties with the government of the country where they were signed. The original is therefore held at the National Archives of the United States in Washington, D.C. 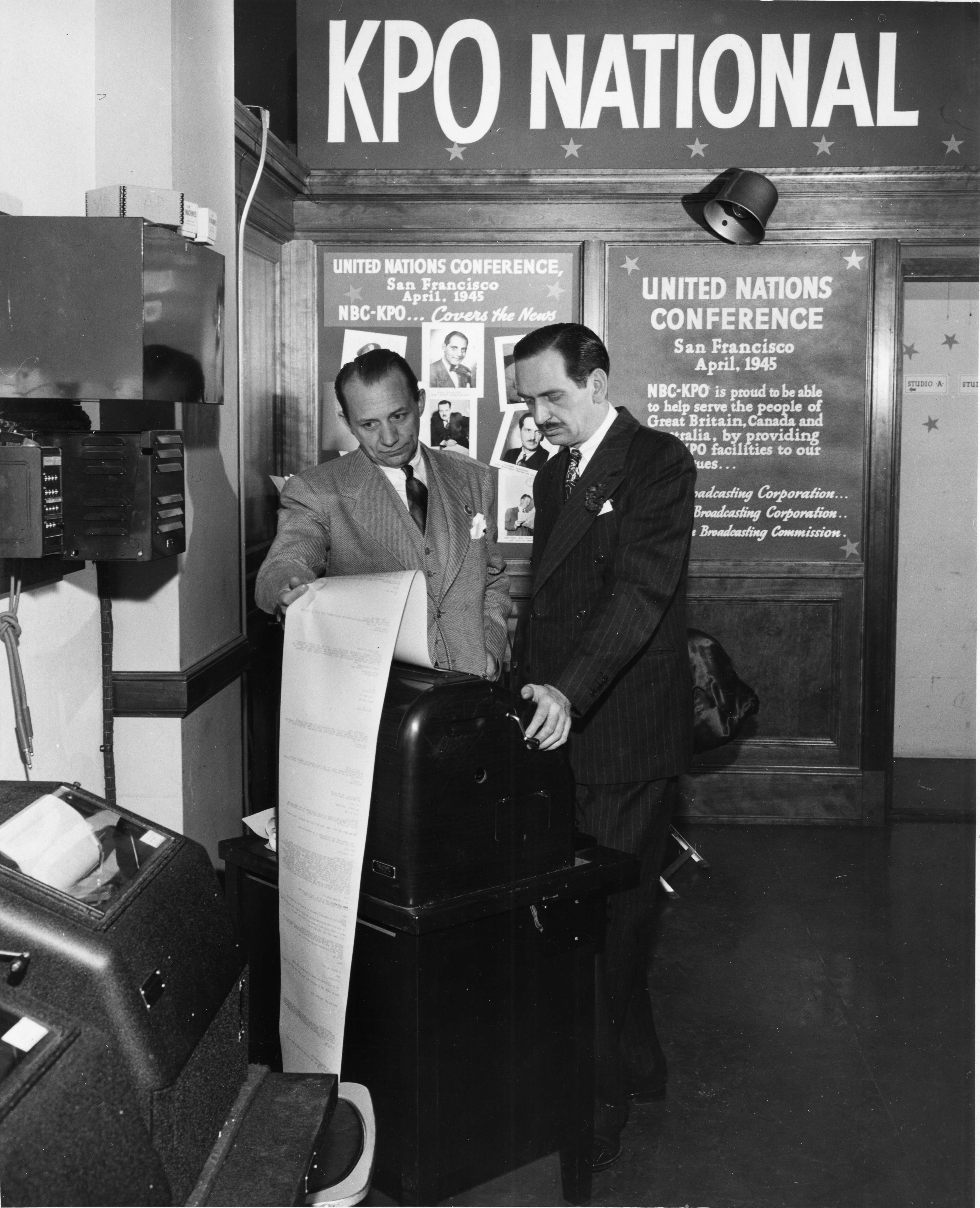 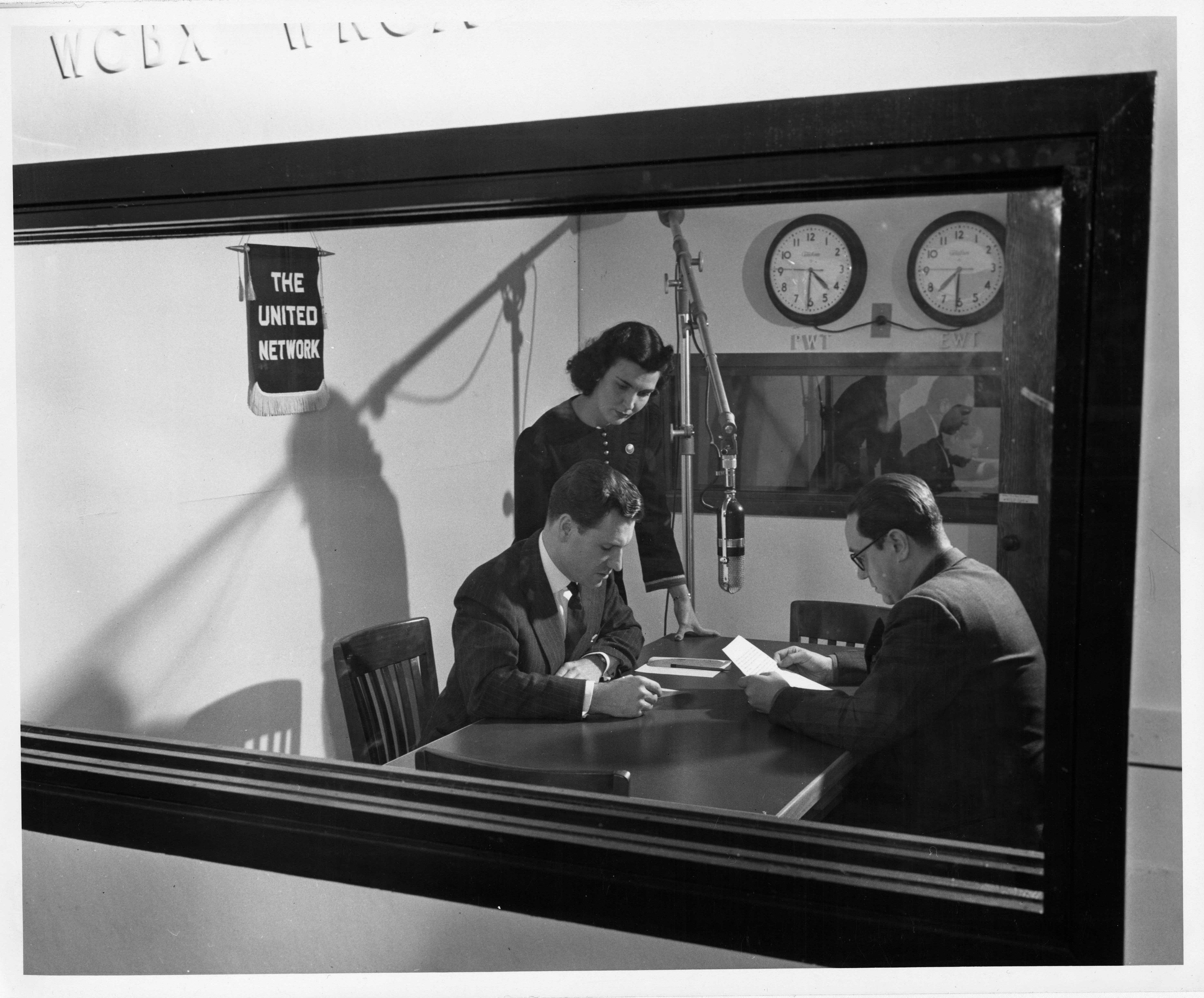 KPO was a San Francisco-based radio. In 1947, it was absorbed by the American National Broadcasting Company (NBC) and became KNBR.